The incidence of papillary thyroid cancer has been increasing at a rate faster than any other thyroid malignancy and accounts for the majority of all thyroid neoplasms (75-85%). It is also the most common type of thyroid cancer to develop from prior radiation exposure.1 Radiology plays a crucial role in the diagnosis of papillary thyroid cancer, with ultrasound being one of the initial steps in the diagnostic workup. In addition, radioiodine (I-131) nuclear medicine studies can be used to evaluate for distant metastases as well as a treatment modality in ablating thyroid cancer. Thyroid lobectomy is considered the mainstay for treatment, with total thyroidectomy being reserved for higher risk tumors. Our case study illustrates the atypical clinical presentation, diagnostic evaluation, and therapeutic intervention of a patient with metastatic diffuse sclerosing variant of papillary thyroid carcinoma, which is a rare and aggressive subtype.

A 16-year-old Caucasian male with a family history of Graves disease presented to the Ear Nose and Throat clinic for a painless neck mass that had been progressively growing over the past year. The patient was asymptomatic otherwise. Two lower neck masses were palpated on physical exam. A computed tomography (CT) of the neck with contrast was initially ordered (Figure 1). The left thyroid showed a centrally necrotic 5 x 2.6 centimeter mass. The patient also had extensive lymphadenopathy extending from above the hyoid bone to the retrosternocleidomastoid fascia plane of the neck.

The combination of the thyroid mass and pathologic appearing lymphadenopathy was concerning for thyroid malignancy with metastatic disease, so ultrasound-guided fine needle aspiration (FNA) of the left thyroid was ordered (Figure 2), along with a biopsy of the enlarged left lymph node. 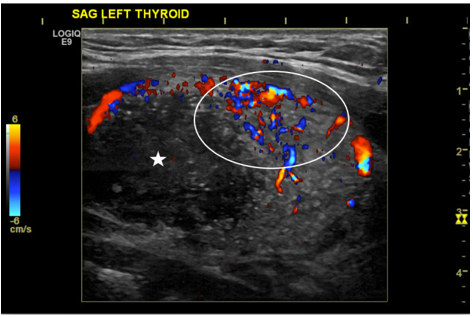 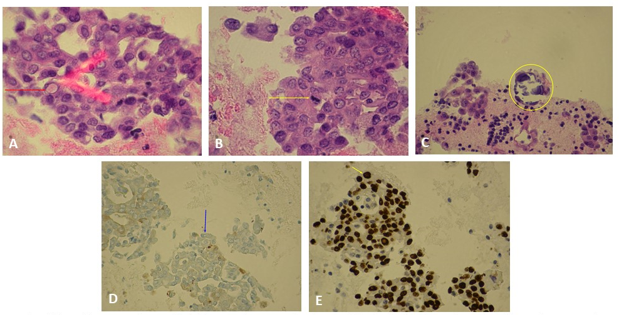 The FNA revealed malignant cells identified in groups with irregular nuclei, nuclear grooves, and intranuclear cytoplasmic pseudoinclusions (Figure 3)- which is consistent with papillary thyroid cancer. The lymph node biopsy showed metastatic thyroid cancer and stained positive for thyroglobulin and thyroid transcription factor 1 (TTF1), both of which are seen in papillary thyroid carcinoma.
After the diagnosis was established, the decision was made to undergo a total thyroidectomy and excision of the affected lymph nodes. A large tumor was noted on the superior portion of the left lobe of the thyroid, which was surrounded by bulky lymph nodes (Figure 4). A total of 25 lymph nodes were examined by a pathologist,18 of which were found to be positive for papillary thyroid cancer markers. Immunohistological evaluation of the tumor was performed, which stained positive for keratin CK19, P63, TTF1, and high-molecular-weight keratin - all of which are markers for papillary thyroid cancer. The gross specimen of the thyroid mass revealed a rare and aggressive variant of papillary thyroid cancer, known as the diffuse sclerosing variant.
The patient tolerated the procedure well and was noted to have a strong cough and normal phonation afterward. He was started on synthroid for TSH suppression and scheduled for radioactive iodine (I-131) therapy. A nuclear medicine scan was performed two weeks after I-131 therapy and showed no evidence of residual metastasis. 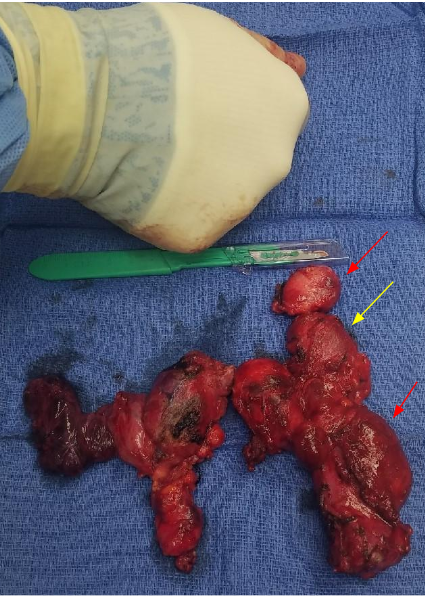 Papillary thyroid cancer accounts for the majority of thyroid neoplasms and is more common in middle-aged caucasian females.5 Risk factors include radiation exposure during childhood, first-degree relatives with thyroid cancer, and thyroid cancer syndromes such as multiple endocrine neoplasia type II.6 It typically presents as a painless neck mass. Approximately 2-10 percent of patients will have metastases beyond the neck at the time of diagnosis, most commonly to the lungs and skeletal bones. Mutations in the mitogen-activated protein kinase pathway (MAPK) have been shown to play a critical role in the development of papillary thyroid cancer, especially the mutations of the BRAF gene.7,8